SaifulMuluk: The Legend and The Lake

Prince Saif-ul-Malook was the only child of the great Egyptian king, Asim bin Sufwan. They inherited huge treasures from royal ancestry. In his childhood, one day the prince asked his father about the most valuable artifact in their family heritage? His father showed him a sovereign stamp from Prophet Suleiman, The King of Israel (who well-known for the ruler over demons and fairies) presented to his ancestors as a token of the alliance.

The prince used to look at the picture of the beautiful royal wedding couple, inscribed on the stamp. As he grew adult, the prince recognized himself in the picture on the stamp. But who is the heavenly beauty being beside him? Royal messengers are sent to all known Kingdoms on earth to find the lady but all return unsuccessful. The prince saw her in his dream and falls in love with her, rejecting all alternatives proposed to him. He bids farewell to the crown, to set on a quest of finding his true love.

On his travel, the prince meets an Ethereal Saint with the power of looking into the past and the future. The saint looks at the past of lady engraved on the stamp revealing her true origin being Badi-ul-Jamal, Princess of Fairies, held captive in the while castle in the fairyland, by an extremely powerful White Ogre (Sufaid Deo) as punishment for not marry him. The saint cautions the prince that no mortal can get there without withstanding 7 deadly trails.

Saifulmalook, after 6 years and 40 days of patience-testing traveling and withstanding 7 testing trails, succeeded to defeat the White Gaint and free Badi-ul-Jamal. The prince made the impossible, possible with help of the Stamp from Prophet Solomon, the Ring gifted by the saint, and most importantly with the power of his Character, Courage, and Faith. Ansoo Lake (The Lake of Tears), Sheosar (The Blind Lake), and Deosai (The Land of Giants) are believed to be the monuments of the trails, the prince suffered to find the true love.

The Prince and the Fairy got united forever, at an emerald green lake, surrounded by the glacier mountains, in the gleaming shine of full-moon on the 14th lunar night. The ceremony was attended by all the fairyland where Badi-ul-Jamal was crowned as their new Queen. 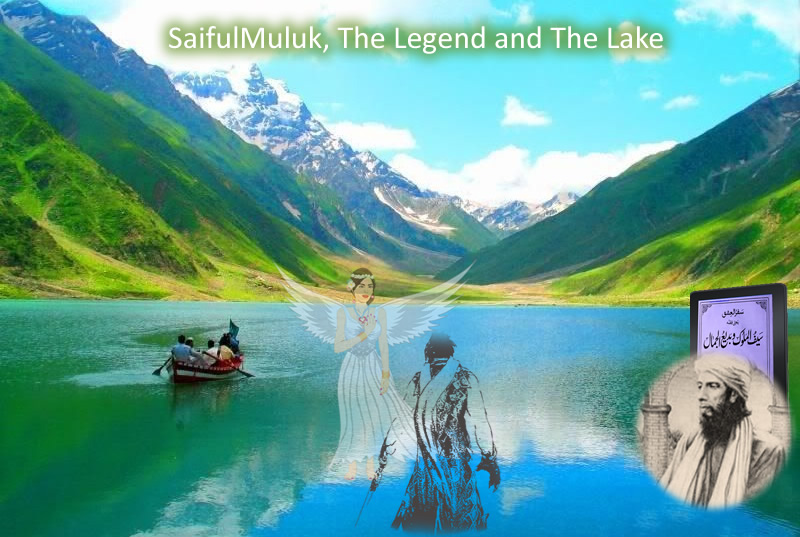 Saiful Muluk lake is 300,000 years old glacier lake located in Kaghan Valley (near the town of Naran) in the Mansehra district of Khyber Pakhtunkhwa province of Pakistan. The lake is above the pine tree line, 10578 feet above the sea level. The surface area is 2.75 square kilometers with 113 feet maximum depth.

The lake host rich eco bio-diversity of many species of blue-green algae and large brown trout. There are 26 species of the vascular plant that exist in the area, with Asteraceae the most commonly found species. Other species commonly found in the region are Ranunculaceae, Compositae, Cruciferae, Gramineae, Apiaceae, Leguminosae, Scrophulariaceae, and Polygonaceae.

The Guardian rated it 5th top tourist destination in Pakistan. Every winter, from December to March, the temperature drops to -6, covering the lake and the surrounding mountains in giant snow. The best months to visit are from May to September when by every 14th night of the lunar month, the lake turns into a mirror, cradling the mountains, the sky, the innumerable twinkling stars, and the glowing orb of the moon.

Mian Muhammad Bakhsh was born in 1830 in Khari Sharif, Mirpur, now in Kashmir then a part of Punjab territory. He was a gifted writer and poet of the Muslim Qadri Sufi Order. He wrote several books on religion and folklore rustic wisdom. In 1863 he composed his masterpiece named Safar-e-Ishq (The Journey of Love) which later become classic as “Saiful Malook”, after the name of its main character, a prince who gave up everything to find true love.

It took Mian Muhammad Bakash, 6 years to print it from Mustafai Printing Press, Urdu Bazar, Lahore. It was not easy to print books. The book contains 373 pages (with the addition of two more pages), each page containing 25 couplets. The first edition of the book was printed in 1869.

Saifulmalook, the story of love between the prince and a fairy is written in the form of a long epic poem. It is comparable to Edmund Spenser’s Faerie Queene subject-wise, to Rumi’s Poetry theme-wise, and Homer Iliad and Odyssey in cultural impact.

Goodbye dear! let’s bid farewell to each other
Farewell that we’ll remember and cry, all life

Goodbye dear! how short is the life
Celebrations it will, if we ever met again

People scare me, dark is the afterlife
I heard there’s a merciful one, wearing black

If He is my friend, everyone is, even the strangers
House into the blue Muhammad, as dear departed

Gone the day, and back to home, everyone is
Yet not seen again are those, taken away by death

Previous Are we heading for Third World War (WW)?
Next